Our recipes and cocktails 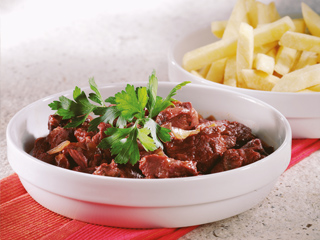 Preheat the oven to 170°C. Peal the onions and chop them finely. Peal the garlic. Put a big pot on the stove (medium heat) and melt a bit of butter. Put the onions and garlic in the pot; stir to avoid browning the onions.

Cut the pork cheeks in halves. Put a pan on the stove (medium heat). Melt some butter to brown the cheeks and spice them with pepper and salt. Don't put too much meat at once and don't stir it in the pan. At this point, only the surface of the cheeks matters - don't try to cook them fully. Once the meat is browned, put it in the pot with the onions.

Take the cooking fat out of the pan; heat it at medium heat. Put in the Kriek, heat it on high heat and stir in order to dilute all the cooking juices in the beer. Put it all in the pot and add the cloves. Set the flame on medium heat.

Tie the bay leaves and thyme sprigs together with kitchen twine. Add it to the stew with a bit of cherry jam.

Spread a big covering of mustard on the gingerbread slices. Put them in the stew, mustard down, and cover the pot. Put the pot in the oven at 170°C for one and a half to two hours. Check the meat: it has to be very tender.

While the stew is cooking, prepare homemade Belgian fries and a mixed green salad. For instance, season watercress with a bit of oil, vinegar, salt and pepper. Take the bouquet of herbs out of the stew, serve the cheeks with sauce, fries, salad and homemade mayonnaise.

This recipe was created by top chef Jeroen Meus for the famous cooking show Dagelijkse Kost on the Flemish TV station Één. The original recipe doesn't specify that you should use Lindemans Kriek, but we highly recommend it! ;-)